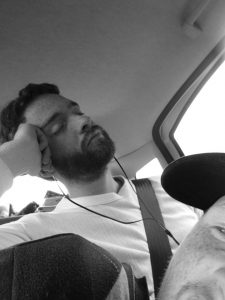 Thanks Chris (Brokengod) for putting together DarkCake and getting me onboard. I’ve uploaded tracks to Youtube sporadically under various names over the years but it’s exciting to have it combined to a friend’s efforts and other artists as part of a label.

I’ve loved piano and computer games music from a young age but it wasn’t until I was eighteen that I started creating music. The internet really opened up an auditory world for me, and I would hear totally new sounds and genres for the first time – the floodgates were open and it would arrive fast even with the 56k modem. Although I can’t faithfully recall just how impactful the experience was now – hearing Selected Ambient Works Vol II by Aphex Twin for the first time just opened the doors to the possibilities of where music could go. I was simply amazed that these sounds were produced on earth by a human. I craved more of the same and was shortly introduced to the sounds of Brian Eno and Squarepusher also.

There was never a decision to start making music, It was just something I was drawn to and it often superseded attention to other things. I wanted to tinker with sound and explore the possibilities between genres – I’d go everywhere ready to sample. More frequently than not, there wasn’t a thought process of making a piece of music that had a start and an end – it was just playing with sound. If something in there significantly branched off from a project it might spur another idea and would get put into a new one. I’d often experiment to see if i could re-create sounds and textures that I liked which was really satisfying when you were able to close in.

Hope to arrange more stuff into releases in the future.